Cut two sections of solid core 14 gauge wire to 20cm. Strip the insulation from ~1cm from each end of each wire.

Next, solder one end of each wire to the terminals of the reset button.

Place the hex nut into the the hexagonal pocket in the faceplate above the “RESET” text.

Now, push the reset button through the back face of the faceplate and screw it into the nut until the button assembly is tight against the faceplate.

Finally, reseat the red button cap onto the pin.

First, peel the paper backing from the keypad.

Then, carefully place the female header and flex cable through the slot in the lower portion of the faceplate. 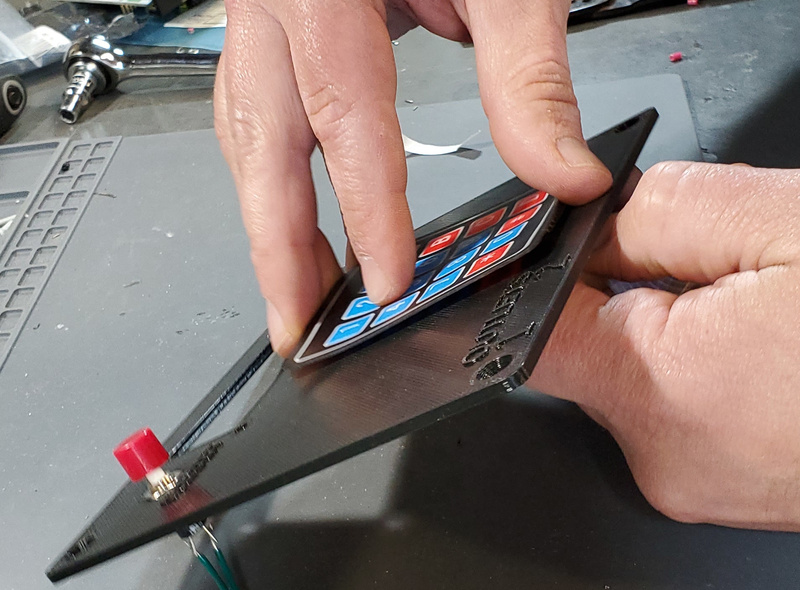 Then, place bolts through each of the four holes through the LCD and faceplate at the corners of the LCD module. Tighten nuts with the Allen wrench and socket wrench.

Finally, place female/male jumper cables on the 6 pins on each end of the header pins on the LCD module.

First, strip 0.5-1 cm of insulation from the end of each section of wire

Next, using the helping hands, solder the 15 cm wires to the tabs on one of the AC outlet.

Repeat this process with the 10 cm wires and the other AC outlet. Set these aside for later.

Because it is generally not possible to push in the nuts with one’s hands, I generally use a bolt to accomplish this. To to this, hold the nut in place with one hand, turn the skirt over and one of the countersunk holes in either the faceplate or the backplate over the hole in which the push nut has been place. Then place a bolt through through that hole and thread it into the push nut.

Finally, screw the bolt down to pull the push nut into the hole until the exposed face is flush with the plastic. Repeat in the other seven corner of the skirt.

Next, place an M3 x 0.5 Socket hex head bolt through the small holes adjacent to the AC power receptacle. Using pliers (it is difficult to use a socket wrench in this position), place a M3 nut inside the device housing onto end of the bolt. Using a metric 2.5 Allen wrench tighten the bolt onto the nut. The pictures below show these bolts being place after the AC outlets have been places and wired, but the task of placing the bolts is much easier before installing the AC outlets.

Install the prepared AC outlets into the housing by pushing them, wires first, through the two square openings in the skirt from the outside of the housing. Push them through until they click into place. The AC outlet with the longer (15cm) wires should be placed in the opening farther away from the custom PCB.

Next, attach the ends of each red wires into the corresponding screw terminals on the 2-relay module. Each relay (the large blue cubes on the module) has three screw terminals. The short red wire to the PCB should already be attached to the center screw terminal of each relay. The red wires from the AC outlets should be attached to the left terminal for each of the relays, with the left AC outlet being attached to the left relay. This works best if the tinned end of the wires are bent in a 90-degree angle to the rest wire before attempting to connect to the relay module. After the wire has been placed into the correct terminal, tighten the screw on the terminal to secure the wire. Pull gently on the wire to make sure it does not easily come out of the terminal.

Installation of Arduino Mega and ethernet shield to device

Plug the Ethernet Shield into the Arduino Mega

Installation of the Arduino Mega/Ethernet Shield into the housing is most easily accomplished by placing the USB and ethernet outlets on the boards into their respective openings in the housing skirt by placing them at an angle from the backside of the deviReset button wire ce (the side with the buck converters, real time clock and PT100 module on the PCB).

Now you will install the VIN wire for the Arduino to receive power. For this you will use a 22 gauge wire with each end stripped of insulation for about 0.5 cm.

One end of this wire you will connect to the green terminal block position labeled “To Arduino VIN/9V”.

Finally, insert the other end into the Arduino VIN pin on the Ethernet shield. Sometimes this is also labeled “9V”, and is generally between the ground pins, and A0 pin.

Next, install the faceplate to the device

Third, attach the LCD jumper cables to the LCD header on the PCB. Only the outside 6 LCD pins should have attached wires, and these wires should go in the 6 outside-most headers, in the same order they occur on the LCD.

Finally, carefully place the faceplate down on the housing skirt so that no wires are pinched between those two parts and then screw down the faceplate with four M4 flat head bolts.

After installing software into the device, but before closing the backplate, you will need to adjust the contrast on the LCD screen before you can likely see anything displayed on it.
Use a standard AC power cable to connect the device to a wall outlet. Then, when the device comes on, CAREFULLY, WITHOUT TOUCHING ANY OTHER INTERNAL PART OF THE DEVICE, use the lcd potentiometer mounted on the back of the PCB to adjust the contrast of the LCD screen.

One the contrast of the display is done, you can attach the backplate with 4 M4 bolts.

Now your device is assembled.